You first notice it in the middle of the night, stumbling out to the bathroom, a weird draining sound that barely registers through the haze of sleepiness. The next day, maybe you’re in a rush to work and hear the same noise again after flushing. But you don’t have time to deal with that right now! And so the next week goes by with similar excuses piling up until one day you come home and there’s water leaking across the first floor of your house.

We’ve all been guilty of this – ignoring a problem that we don’t want to deal with. This is a classic human response, especially in home repair scenarios when facing an expensive or inconvenient problem. Unfortunately, ignoring the problem always makes it worse.

Here are a few reasons why not to ignore these signs:

Talking to one of the Downers Grove, IL bathroom remodeling experts at J&J Construction will allow you to realistically assess the issue, and put your mind at ease with a solution that works. Call 630-904-8500 and get an expert opinion about the best steps to take for your specific needs.

The word trend is defined by a general direction of change that is developing and becoming more common. While some... Read More

Many of us sit and dream about a more spacious home. You may wish for a larger closet to house... Read More 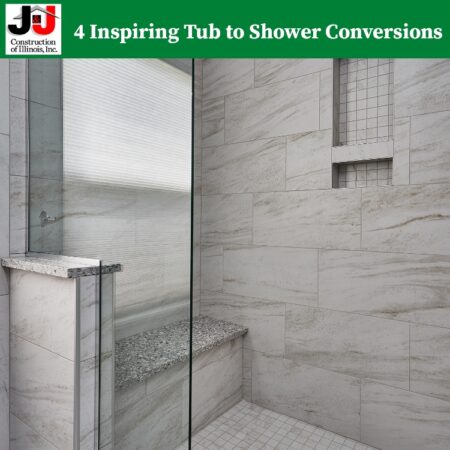 Do you already have a tub and shower combination but don’t see a need for it anymore? Or are you... Read More

How To Style Your Bathroom Grandmillennial

When it comes to bathroom remodeling, no one stays on top of current trends like J&J Construction. We love to... Read More

Your Guide to Bathroom Lighting

Lighting is critical to your bathroom design. When considering a bathroom install or renovation, be sure to think about the... Read More

If you’ve considered a bathroom renovation in recent years, chances are you’ve given serious thought to a walk-in shower. After... Read More

Why Hire a Design-Build Firm for your Kitchen or Bathroom Remodel?

When you’re ready to make your renovation plans happen, you’re faced with a critical decision: Do you do it yourself,... Read More

Why do bathrooms always come with so much - stuff? Ever notice, while you’re checking out design blogs and magazines... Read More

The way that we use our homes changed in 2020. Daily activities now can include work, virtual classes, working out,... Read More

The Latest Bath Trends For Your Home

Thinking about updating a master bathroom, guest bath, or powder room? If you’re not working in the industry, you may... Read More

How To Style Your Bathroom Grandmillennial

Your Guide to Kitchen Faucets